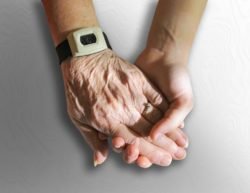 The most important element of humankind is to develop secure attachments. From the moment of our birth, our brain tries to develop attachments through physical contact such as cuddling. Out of the five sense organs, the sensation of touch is considered to develop first in the mother’s womb. Henceforth, touch becomes an integral part of life contributing to the socio-emotional and cognitive development of the child. The role of touch in the development of attachments is essential. Touch Deprivation at the times of infancy has shown adverse effects such as hostile aggression, shyness, difficulties eating food, stubbornness, and excessive crying (Davis, Rovers & Petrella, 2017).

The Importance of Touch

Ashley Montagu, an anthropologist, claims that “touch is not experienced as a single physical modality, as sensation, but effectively, as emotion” (​Peloquin​,1989). This is mainly because our skin contains receptors that elicit emotional responses (Gallace & Spence, 2010; Field, 2001). A sense of touch in the form of strong handshakes, tender kisses or tight hugs can often elicit strong emotions that can often be understood as a language that communicates things better than any verbal communication (Gallace & Spence, 2010; Jones and Yarbrough, 1985). Among all the sensory organs, the tactile sensation is considered to have the maximum arousal capacity as it is stronger than verbal or emotional contact and due to this reason, it is also considered as the key necessity of our species (Field, 2001).

However, after the advent of Covid-19 pandemic, there has been a shift into how we perceive human contact. With the given circumstances of prolonged physical separation , it is difficult for a man to fight against his innate nature for the need for human touch as it also provides a sense of protection.

​Research studies have also shown that touch has been seen as therapeutic in nature (Berendsen, 2017). Hence, a gentle touch or a hug from our loved ones helps in the improvement of the person’s mental health as it provides a sense of warmth and security. There have been studies that have found that individual can feel lonely in the absence of touch where they develop a strong need to be embraced. Further researchers have found that touch deprivation aggravates depression and debilitates the immune system whereas positive touch helps in the reduction of the stress hormones like cortisol, that can impair the immune system. Additionally, it was found that tactile sensation has the capacity to calm the nervous system as it reduces the heart rate and blood pressure. It is for this reason, self-care sessions like massage or spa days are suggested at the times of stress and anxiety as it helps in slowing down the brain waves resulting into reduction of the release of substance P- a neurotransmitter that increases pain sensitivity (Field, 2010).

Touch has also been seen as a powerful therapy tool in clinical settings as it has an influential role in developing rapport with the client. The physical touch with verbal assurance soothes the client. The presence of the therapist in the same room and the touch on their shoulder or arm with their consent is said to be comforting and stabilizing for the client. ​Further, researchers have found that touch has the power to instil a sense of deeper trust and a stronger connection between the client and the therapist as it helps in developing a sense of comfort and improves communication (Motangu, 1971). Additionally, touch facilitates the communication of incapable verbal messages (Berendsen, 2017)​.

Given the importance of touch, the question arises, what happens when people lack physical contact? There has been evidence that during the lack of physical touch which is an essential need for human species, people tend to find an alternative such as drug, alcohol or excessive eating as they enable to fulfil the void created by the lack of touch.

Berendsen.P..(2017).The Intervention of Touch in Psychotherapy and Trauma Treatment. In Rovers.M., Malette.J. & Guirguis.M (Eds.), ​Touch in the Helping Professions ​University of Ottawa Press.

3 thoughts on “Touch Deprivation during a Pandemic”